Pamex roadshow in Nepal a hit

The international outreach programme designed to promote Pamex 2020 among the neighbouring countries saw team Pamex visit Nepal on an eight-day tour of the country. Headed by Kamal Chopra, chairman, Pamex, the team started from Delhi in the early hours on 4 November. The first stop on the tour was at Dhangadhi, Nepal. A gathering of more than 15 printers greeted the team at Afno Ghar & Temple Resort. The next morning, the team started towards Butwal with stops at Nepalgunj and Lamhiya. 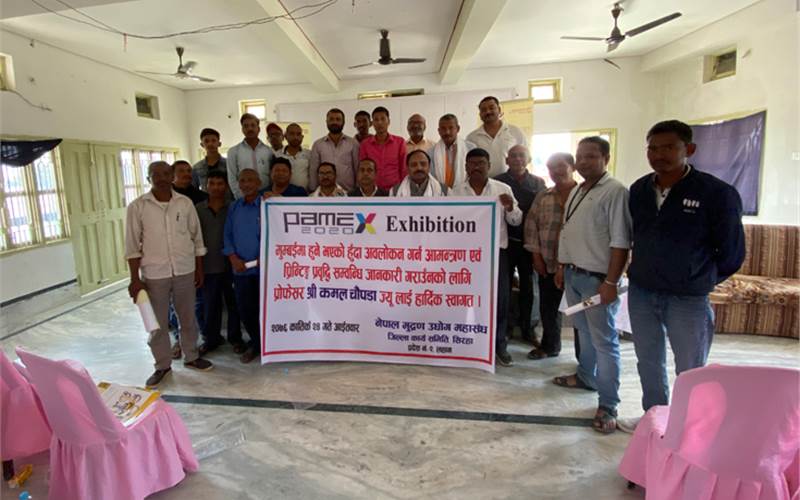 On the third day, the team headed towards Pokhara with a stop at Waling. The first part of the Print Odyssey ended at Kathmandu on 7 November, 2019. The team had a halt at Damauli and Mugling where a breakfast meeting and lunch meeting was held respectively.

On 8 November, an introductory meet along with a technical conference and a table-top exhibition was held at Alice Receptions in Kathmandu. More than 300 printers attended this event.

The second part of Print Odyssey started on 9 November. The first stop after departing from Kathmandu was at a small town called Bhaktapur on the outskirts of the city. From there, the Odyssey moved on to Janakpur with a halt at Banega. In the evening, a group of 35 printers gathered to meet the team at Janakpur.

On the last day of the tour, the team headed towards Biratnagar. There were stops at Lahan, Itahri on the way. The team met more than 100 printers spread across the three stations.

The objective of this exercise was to understand the issues being faced by printers across the country as well as the promotion of Pamex 2020.

The issues that came up for discussions were same at almost all the stops undertaken in the Odyssey.  Most of the printers faced issues with availability of trained technical professionals to operate their units. As the industry in Nepal is highly depended on India, the printers also faced issues regarding acquiring of raw materials and spare parts for their machines. The ever-present issue of falling print prices was also recurring theme at these printings.

Chopra addressed all the issues put in front of him in great details. He emphasised on the need to produce cheaper rather than sell cheaper to gain more business. He also advised the printers to join hands and form clusters to enable them to become more competitive. He informed the printers about the MoU signed between All India Federation of Master Printers (AIFMP) and Federation of Nepal Printers Association (FNPA) wherein the printers could send professionals to India to undergo training.

“The issues faced by the printers in Nepal are similar to the issues faced by us in India. The industry is changing. We need to change with the times. The need of the customers is also changing. We need to identify this need and cater to it. For that, we need to join hands and produce at a larger rate to bring down the costs. So the main theme of the Print Odyssey was to produce cheaper,” said Chopra.

Pamex is now all geared up for the main event, scheduled to be held from 6-9 January 2020 at Bombay Exhibition Centre, Mumbai.