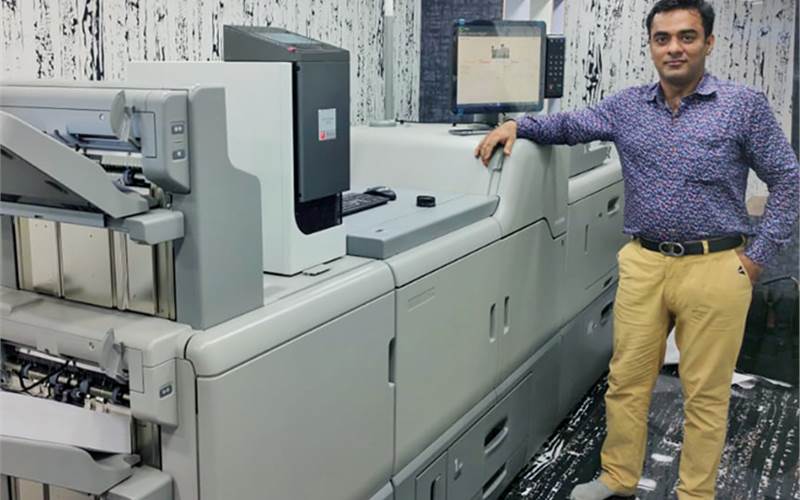 Danish Rahman, owner, Image Print, said, “The company’s print production volume has doubled just two months after the installation of the machine. It has a lot of new and exciting features, such as banner printing, and the addition of special colours like gold, silver, white and clear ink, apart from traditional CMYK has added much more value to the already existing avenue.”

He added that the machine also produces unparalleled results and excellent colour gamut in special media, such as texture, metallic finish and kraft board, which has also contributed to increasing the print volume.

“The machine supports up to 360-gsm auto duplex. The added and exciting features give us an edge over our competitors, and we also have the early mover advantage.” he added.

Image Print was established in 2004 as a small photocopy and print shop by Danish Rahman in Dalhousie area, while he was still studying in his final year of college pursuing BCom. Initially, the company got its large chunk of customers from banks, corporate offices, the court, and the government offices nearby.

Rahman said the demand was unexpected since he was new to the printing industry, with no past knowledge. But he soon realised that he must stick to it and took it up as a challenge. So, Rahman converted his business into a complete designing and digital/commercial printing unit. With this, he also started getting orders for flyers, brochures, ID cards, memorandum, annual reports, etc.

Rahman said after the installation of the Ricoh Pro C7200X, many print houses, suppliers, publishers, resellers, and ad agencies have contacted the company to print their jobs and this has steadily increased the company’s print volume every day. “With the Ricoh, our production has crossed two lakh impressions per month. Earlier, the number was under one lakh. We are confident to achieve a target of five lakh impressions within the next six months,” Rahman said.

He added that today customers look for value-addition in their prints, such as extra colour, special effects like gold, UV, and they want the service in a very short time. “Thus, the Ricoh has proven to be a valuable asset. We also offer other value-added services, such as foiling, UV finish and thermal lamination with 3D, matte/gloss, satin and velvet finish,” he said.

Rahman said with the machine, the company’s label printing orders have also drastically increased. The company has an in-house setup for label punching and cutting, and can print on different label media, such as transparent, PVC and metallic.

Ajeet Pareek, business head – digital products and solutions, Monotech Systems, said, “It’s a breakthrough for us, as this is the first installation of Ricoh Pro C7200X in eastern India.”